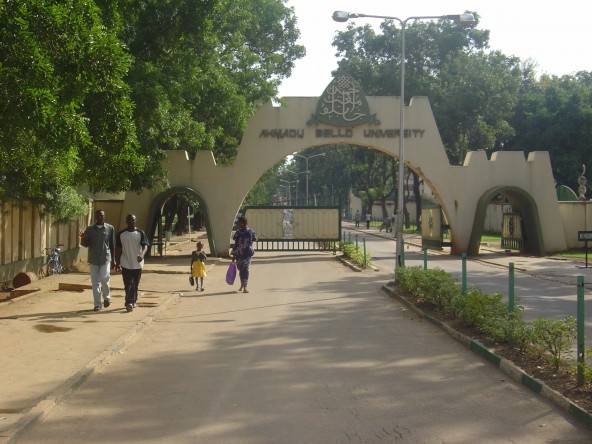 It’s both funny and calmly stupid, that those who are expected and in the position to enforce the law, are the very ones breaking it! According to information we have confirmed today, a lecturer at the Ahmadu Bello University (ABU), which is situated in Zaria was caught on Sunday night, trying to sneak into a private female hostel in the school campus.

We were informed that the lecturer disguised himself by wearing a Hijab (which is the muslim veil for females only) and attempted to sneak into the hostel before he was intercepted by the school security.

According to Khalifa Sha’aibu, who witness everything, disclosed to Dailyschoolnews.com.ng, that this is not the first time the lecturer was entering the hostel to visit his girl friend, further alleging that he’s been visiting the hostel for some times now, and on a regular basis.

Sha’aibu further said and we quote:

“The most alarming fact, is that the lecturer, whom i respected very must, is using the Hijab and as a Muslim, I feel sad that somebody would use something that we respect, to perpetrate crime. This wonder why this lecturer don’t get himself a room to continue this act. He was caught by a vigilante member that noticed the structure of the man, which is quite different from a female body built and exposed him.

After the Vigilante member caught him, we discovered that he has been entering the hostel with the consent of the girl. The owner of the private hostel had barred men from entering the rooms for security reasons and to stop imoral acts.

It was further gathered that the lecturer was handed over to a team of army personnel around the school gate.

We were also informed that the Law officers have ransacked the lecturer’s house for any other information which would expose his illegal action which he’s been carrying out in the school.

When contacted, Director of Public Affairs in the university, Dr. Ismail Shehu, said he heard something like that but that no official report has been made.

He added that when an official report is received, the university will take action.

He disclosed and we quote: “It’s been a long time tradition and all students, including working staff are aware, that ABU does not tolerate any form and act of indiscipline. Full investigation would be carried out and both the lecturer and student would be punished accordingly. There is no doubt about that”

We hope Justice is carried out on the lecturer!