This is a story I hope all friends, parent and guardians share with their friends on social networks, a story which is both motivating to people of all age.

This story is about the best Babcock graduating student: Nineteen-year-old best graduating student of the Babcock University, Ilishan-Remo, Ogun State, whose name is Daniella Uzoamaka, after receiving the award, she speaks on her rough road to success.

According to Nigeria award winning writer and the late literary giant, Chinua Achebe, we decide to quote his words which he used in his award-winning novel, Things Fall Apart.

“Looking at a king’s mouth, one would think he never sucked at his mother’s breast” is one of the famous proverbs”

The truth is that the maxim suggests that usually comes when one is admiring the success of an accomplished man, there is the temptation to think that he never experienced any difficulties or hard times in life. 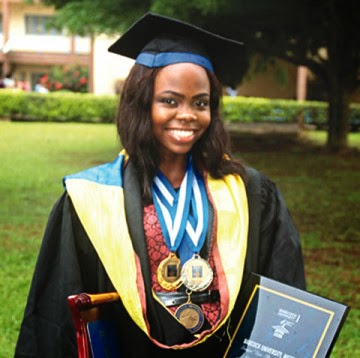 One thing for sure, is that the story of 19-year-old Uzoamaka Daniella, the 2014 best graduating student of the Babcock University, Ilishan-Remo, Ogun State, underscores this adage.

The Public Administration first class graduate obtained a Cumulative Grade Point Average 4.86 out of the normal 5.00, which helped her to emerge as the school valedictorian.

The truth is that with this accomplishment, she received the academic, leadership, community and spiritual awards during the university’s 12th convocation, which was held on the 1st of June, 2014.

Some of the honors she received are as follows:

Looking at her academic record at the university, we would think that throughout her road to success, she has everything and that it was tiled with gold through and through or that she was never associated with any manner of scholarly disappointment.

This view is, however, far from reality.

In fact, before the harvest of scholastic successes, the youngster had witnessed some rough edges of academic frustration. Particularly, at her primary and secondary school levels, were she disclosed to Dailyschoolnews correspondent, Faith, that she was not just an average pupil, but beneath that, and she also went on to say that she also experienced unpleasant academic moments.

She notes with a touch of simplicity in her voice, “I have a piece of information for you. Do you know that I wrote the SSCE on four different occasions? The first was the private candidate November/December WASSCE; then my WAEC, NECO and another Nov/Dec examination. I did these examinations then because I had problem with Mathematics.

“You see, I realised at an early stage in my academic pursuit that examination malpractice is not a road to success. The farthest I can remember engaging in any examination malpractice was in my Junior Secondary School 1 class. Further, during my WAEC preparation, I was encouraged by the words of my school principal, Mrs. Oloriade, that it is better to fail honourably than to cheat. These words helped me to keep tight to my integrity in my exams.”